The last week has seen a lively debate going on, mainly over Twitter, about the future of the Mecca Bingo site on Eltham Hill, with Conservatives (led by Parliamentary Candidate Louie French) campaigning against plans to use the site for flats being told to stop ‘misrepresenting’ the situation by a range of Labour politicians, including the Leader of the Council.

At the heart of this debate is the future of Mecca Bingo, a much loved community asset, which was beautifully described in this month’s SE9 magazine in the following way:

“It is evidently a place enjoyed and loved by many. To call this social hub an ‘under-used site’ would be reductive. It felt alive and buzzing with heart and soul. A full house!”

So why would anyone think such that Mecca Bingo is under threat?

It is a matter of record that Greenwich Council has published plans which include the closure of the Mecca Bingo Hall and the construction of flats on that site. The Eltham Town Centre Masterplan Supplementary Planning Document (SPD) was adopted by Greenwich Council in April 2012 and states that:

The very first one of these “opportunities for built change” is the Mecca Bingo site which is described in the following terms: 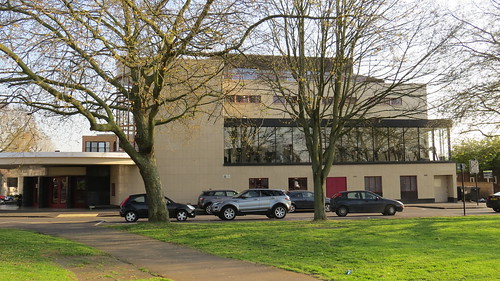 “This site is currently in use by Mecca Bingo, but would be appropriate for residential development in the future. Any development should create a better relationship between the activity of the building and the street to make the entrance to Kingsground more appealing.

Scale and massing of any development should reflect that of the existing building in the front half of the site, but should scale down progressively to the south of the site to reflect the transition to the residential neighbourhood.”

At the time and regularly since then Conservative Councillors raised concerns about how useful the Eltham Town Centre Masterplan SPD really was, but these have always been rejected by Greenwich Council. In fact at the last meeting of the Full Council on 30th October, Eltham Councillor Charlie Davis asked specifically whether the Council would “either update the Eltham Masterplan or put in place a new Masterplan or guidance for the town centre?” The response from the Cabinet Member responsible, Councillor Sizwe James, was unequivocal:

“It is considered that the current SPD (adopted April 2012) provides a robust framework for development within the town centre and has guided development since it was adopted.”

Just to be clear, despite the Labour Council leadership’s subsequent outrage that anyone would suggest that the Mecca Bingo could be turned into flats, the Cabinet Member responsible defended the document which contained this proposal as a “robust framework for development with the town centre” – a ringing endorsement from where I am sitting.

So the groundwork for the closure of the Mecca Bingo Hall and its conversion to flats was laid in 2012, but what caused the newly appointed Conservative candidate for Eltham Louie French to raise its imminent closure was the recent consultation published by the Council on the ‘Site Allocations Preferred Approach” which justified building flats on the site in the following way:

“Underused site on the edge of Eltham Town Centre, currently in use by Mecca Bingo. Redevelopment presents an opportunity to enhance the townscape while making more efficient use of this accessible edge of town centre site.”

To be clear the Council chose to proceed with only 40 preferred sites in the consultation as it has rejected another 41, so the intention to encourage building on these ‘preferred’ sites is quite clear.

So it was curious to read Labour Councillors pronouncing on Twitter that the Council can’t push for the Mecca Bingo to be closed and flats to be built on the site as the Council didn’t own it. The fact the Council does not own the site is irrelevant in this case, as by classifying the site as suitable for residential development, the Council is flagging up to developers that a bid to build flats would be welcome. So Labour claims that the Council is not responsible either reflect a determination to mislead residents or a lack of understanding of how the planning process works. Worse still is reading Labour politicians claims that the proposal to build on the Mecca Bingo site has not originated from the Council’s leadership when they have published documents which support and encourage the conversion to flats on the site.

We need to be clear that the closure of Mecca Bingo and its conversion to flats has been Council policy since 2012 and the recent consultation confirmed this plan. The confected outrage of Labour Councillors is astonishing – they have published plans stating the Council would like to convert the site to housing (115 flats according to SE9 magazine).

I think it is important to be clear – these are Labour Council plans and Conservatives at every level have a right to campaign against them. Personally I replied to the consultation objecting to the section of the plan regarding the Mecca Bingo in August and I know Louie French, the Conservative Parliamentary Candidate for Eltham responded before the end of the consultation, so we have done our bit. Not a single Labour politician, including their MP, has managed to produce their response to the Labour Council’s consultation on closing the Mecca Bingo and turning it into flats.

Closing the Mecca Bingo is a Labour proposal, published by them as a ‘preferred’ site – the chaff they have thrown up to try and distract from this fact is disgraceful. Seatguru british airways 777. Unfortunately unless the Labour MP is prepared to openly disown his own Council’s plans, then everything he has said is irrelevant and if you want to keep bingo in Eltham, only a vote for Louie French next month is going to encourage Labour to change it’s policy.

A gang of thieves who carried out a £50,000 spate of violent robberies on security vans across southeast London have been jailed.

The four-strong organised crime group rushed guards carrying cash boxes as they made deliveries to Post Offices, a Co-Op, and a Mecca Bingo Hall.

They managed to get away with £28,000 in the final raid, but were captured by the Met’s Flying Squad following a high-speed chase.

At Woolwich crown court on Friday, Kieran Beazley, 33, Sam Holmes, 29, Sanchez Williams, 32, and David Leadbeater, 31, were all jailed after admitting conspiracy to rob.

The group, who all have a string of previous convictions, wore masks and gloves as they carried out the robberies between February and June this year.

A security guard was ambushed outside a Post Office in Mottingham on March 4, with one of the robbers – believes to be Beazley – “barging” him and grabbing the cash box.

Another of the gang was brandishing a screwdriver as they fled, driving away in a stolen Ranger Rover Evoque which was later found abandoned.

They struck again on June 4 at a Co-Op in Blackfen, southeast London, arriving in a white van with false numberplates before “violently barging the guard into the railings at the front of the shop”, said the Met.

A cash box containing £12,500 was briefly stolen, but the guard – together with a member of the public – tackled one of the thieves and retrieved the money.

Eight days later they carried out a robbery on a security van at New Eltham Post Office, but the Flying Squad was already lying in wait.

Beazley, Holmes and Williams emerged from their stolen vehicle and “sprinted towards the guard”, with Beazley rugby-tackling him to the ground to steal the cash box containing £28,000.

Leadbeater was the getaway driver, but their van was eventually stopped after crashing into pursuing police vehicles.

Beazley and Holmes are also believed to have been the robbers who ambushed a van outside a Mecca Bingo Hall in Eltham on February 17, when almost £7,000 was stolen.

Beazley, from Eltham, admitted three counts of conspiracy to rob, two counts of handling stolen goods, robbery, and three charges of driving while disqualified, and was jailed for ten years and eight months.

Holmes, from Mottingham, pleaded guilty to one of the robberies and was jailed for 11-and-a-half years.

Detective Inspector Gail Lilley, of Central Specialist Crime, called the robbers “career criminals” adding: “We have put a stop to their criminal activities and taken dangerous criminals off the street.'