There aren’t many sporting events to bet on now, but when that changes, people using the GambetDC app and website run for the D.C. Lottery may quickly begin looking elsewhere to make a bet.

What many see as a missed opportunity for WashingtonDC sports betting is what the DC Lottery calls business as expected.

William Hill’s temporary sportsbook at the Capital One Arena took $13.7 million in bets last month to maintain a dominant position in the market. The book reported $2.7 million in sports betting revenue, good for a 19.9% hold.

Total Washington DC sports betting handle since its launch at the end of May is just $63.8 million. That’s an underwhelming amount of handle for a market three months through the NFL season with a mobile betting component.

Last month, a spokesperson for the DC Lottery told LSR sports betting progressed “as expected” in the nation’s capital during October. The Lottery had a similar tone on November:

“GambetDC aims to maximize revenues for the District while still providing competitive pricing and entertainment value for our target market – sports enthusiasts, casual bettors, lottery players, and fantasy sports players who reside here or commute into the city,” the spokesperson said. “We are happy with its growth and expect this trend to continue.”

GambetDC’s financial breakdown is not explicitly clear, but the spokesperson said about 50% of revenue amounts to profit for the Lottery. That means Gambet turned a ~$440,000 profit in November and has returned about $1.3 million in profit since launch.

Only time will tell if that continues. More private operators will eventually launch, which should lead to higher monthly tax revenue than GambetDC’s profit.

“Private sports wagering operators are an additional revenue source for District, and we expect to see additional outlets soon,” the spokesperson said. “Two Class A Operators are in the process of completing their applications. Currently, there are two Class B applications under review and there are several others in progress. ”

The Lottery’s statement that it’s “providing competitive pricing” could be a bit biased.

A quick glance at GambetDC’s lines show the company is still offering -118 sides on many of its markets it launched with into Montana in March. Most other legal US sportsbooks offer traditional -110 lines.

Cutting that extra vig could entice more bettors to pay extra on their bets for the convenience of mobile betting. The alternative sometimes includes lines that wrap around the block to bet with William Hill.

Mr smith slots. There’s been no attempt to change the business model, though. That means no public data that shows gouging bettors really is maximizing returns.

The DC Lottery’s sportsbook might not be flourishing, but it is growing.

GambetDC could have cemented itself as the mobile betting platform of choice for local sports bettors with no competition for half a year.

Soon, those bettors could have a dozen more mobile options with even more likely coming later in 2021.

Sports betting in Virginia should launch in January in time for sportsbooks to launch and accept Super Bowl bets. The Virginia Lottery has 25 applicants but will only license about half of those.

That will provide plenty of competition for GambetDC – and potentially William Hill’s retail business too – for those bettors near southern DC.

Meanwhile, to the north, Maryland sports betting should launch next year as long as legislators can agree on a bill. Voters approved sports betting through a yes/no referendum in November‘s election.

A screenshot of the “Drive Markets” betting page on GambetDC's site. (Via Simplebet)

The District of Columbia will never be confused for Las Vegas, but it’s helping usher in the next wave of in-game sports betting. 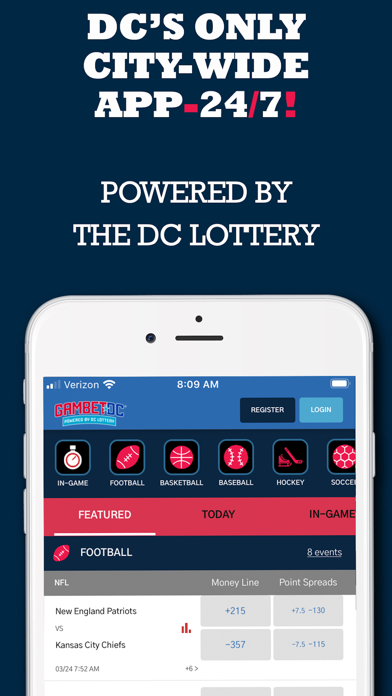 In addition to the option of placing traditional bets on game outcomes, such as the over/under and point spread, bettors can wager money on the result of individual drives during each contest. For example, would the Washington Football Team cross the Tampa Bay Buccaneers’ 20-yard line on a given drive? Would a certain possession culminate in a touchdown, field goal, turnover or punt?

Those are two examples of what the technology company Simplebet refers to as micro markets, a new category of in-game sports betting that Simplebet and its investors are banking on becoming the next big thing in online wagering.

In-game wagering accounts for more than 70 percent of all sports betting in Europe, according to Front Office Sports.

“It’s an important moment for us and our company to get live in a big market like D.C.,” Simplebet co-founder and chief executive Chris Bevilacqua said in a phone interview. “Our whole mission is evangelizing the entertaining value of in-game betting, and I think we’re about to hit an inflection point. Coming out of the pandemic, 2021 is going to be a big year for the whole industry.”

GambetDC’s in-game betting feature is made possible by Simplebet’s proprietary technology, which uses artificial intelligence, machine learning and historical data to re-price the odds for thousands of different outcomes, or micro markets, in real time throughout the game. The odds of a given drive resulting in a touchdown, for instance, are automatically recalculated after each play, based on the down, distance and line of scrimmage. Users may place a bet at those odds up until the start of the next play, at which point the market is temporarily frozen.

“We create the markets, we suspend them, we re-price them and result them through automation,” Bevilacqua said. “That all happens in a matter of minutes and seconds, depending on the actual market.”

The result is thousands of potential games within the game, a type of wagering that Simplebet figures will appeal to more casual bettors. For now, GambetDC is offering in-game wagering only on drive outcomes. Eventually, Bevilacqua said, users will be able to bet on the outcome of every play. Imagine wagering $5 on whether Patrick Mahomes’s next completion will be for 10 or more yards, or if Lamar Jackson’s next run will result in a touchdown.

Simplebet plans to offer real-money NBA and MLB micro-market betting through Intralot, which launched GambetDC in May, and other partners in markets beyond D.C. in the coming months. Using the same technology, it recently launched free-to-play games for the NBA and NFL on the online daily fantasy and sportsbook site FanDuel.

Until then, GambetDC is offering something its competitors are not. The app got off to a slow start, falling well short of its revenue projections last year, in part because it offers worse odds than offshore bookies and the William Hill sportsbook at Capital One Arena.